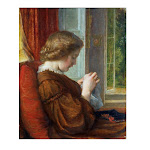 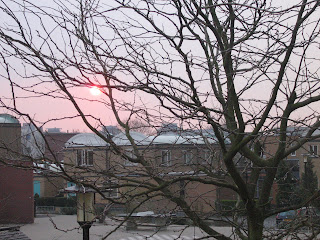 Yesterday we had the most incredible sunrise! Jos tried to get a nice photo but it just would not come out on picture what we could see with the naked eye. The sun was like a perfect round fireball hanging low in the morning sky. It was an amazing color of red which is only hinted at here with the pink haze you can see around it.
Posted by Heidi at 4:43 AM 1 comment:

Nan had asked me a number of questions in the comments of one of my entries a few days ago. I wanted to take a moment to answer her.

Once the flowers are dying back, I dead~head them. At this point, you have to leave the leaves and stems for a further six weeks to allow the 'goodness' to go back into the bulb.

Yes, we do mow the lawns. If you have to mow within six weeks of the bulbs no longer being in flower, then you must mow around them and leaving the green leaves in tact. Once the time has passed you simply mow the leaves away and they rest until the next spring season.

Holland is a beautiful place at this time of year. City areas are all planted up with various bulbs from crocus to daffodils to tulips. We try to make it to the west (coastal) area to view the tulip fields which are a site to see although it has been a couple of years again since we have taken this drive. Maybe this year.....
Posted by Heidi at 5:03 AM 1 comment:

My favorite poem of this season 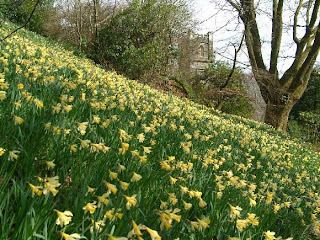 There is no sweeter poem for the spring season that Wordworth's 'Daffodils'! This photo is of Dora's field near Rydal Mount in the Lake District. After Wordsworth's daughter died in 1847, he, along with his sister Dorothy and his wife, planted up a field he had purchased to build a house. He planted daffodils there as a memorial to his daughter. I hope this poem brings you some sunshine today as you read it...

I WANDER'D lonely as a cloud
That floats on high o'er vales and hills,
When all at once I saw a crowd,
A host, of golden daffodils;
Beside the lake, beneath the trees,
Fluttering and dancing in the breeze.

Continuous as the stars that shine
And twinkle on the Milky Way,
They stretch'd in never-ending line
Along the margin of a bay:
Ten thousand saw I at a glance,
Tossing their heads in sprightly dance.
The waves beside them danced; but they
Out-did the sparkling waves in glee:
A poet could not but be gay,
In such a jocund company:
I gazed -- and gazed -- but little thought
What wealth the show to me had brought:
For oft, when on my couch I lie
In vacant or in pensive mood,
They flash upon that inward eye
Which is the bliss of solitude;
And then my heart with pleasure fills,
And dances with the daffodils. 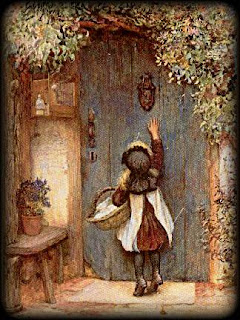 And Spring arose on the garden fair,
Like the Spirit of Love felt everywhere;
And each flower and herb on Earth's dark breast
rose from the dreams of its wintry rest.
Percy Bys 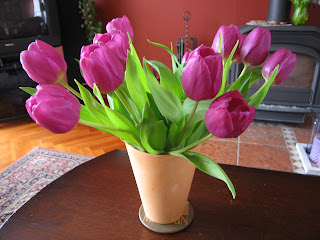 she Shelley
These tulips come from a tulip farm near our weekend cottage. I bought some bouquets as I wanted to start the first day of spring with the colorful flowers around me. This bouquet is purple tulips and I also have one of lilac double tulips and a bouquet of pink and cream tulips. I wish you all a colorful start to spring. Even if the weather where you are is not spring~like, celebrate the start of the season in your heart.
Posted by Heidi at 6:33 AM 5 comments:

The waiting is over 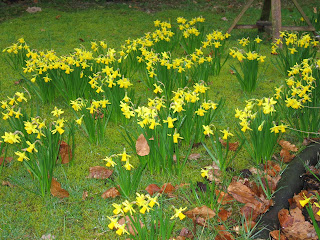 This is such a wonderful time to live in Holland! Our daffodils are out in the grass. Remember the last photo of them waiting to burst forth? It is like little spiritual rays of sunshine to look out at their bright color in the early spring. 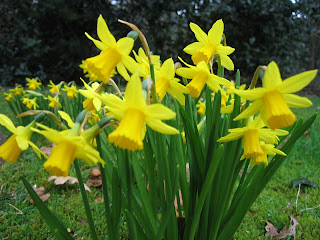 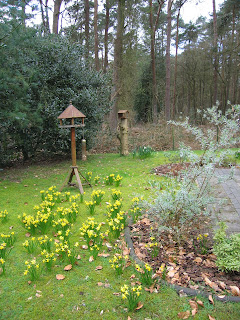 As you can see, our cottage's garden borders right on the woods. We can walk out into this part of the woods from our driveway. There is however, a road going through it leading to the dirt road that comes to the weekend cottage. We have to cross that road yet to walk a bit deeper into the woods. 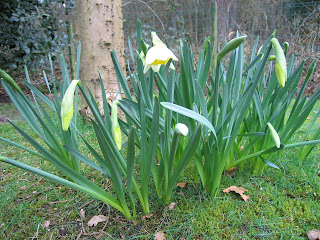 We were surprised to see the newer area we planted right by our second bird feeder was also ready to open. This weekend these full~sized flowers will be in full bloom. It is fun to see the new ones open each weekend. There is yet another patch which should be opening within the next two weeks. Each year, we enjoy them so much and thought we planted so many more but now I have decided that I want to plant as many again this coming fall. We have just put in some some dahlias, ranunculas and sparaxis bulbs. It will be fun to watch these come up later in the spring.
Posted by Heidi at 5:23 AM 6 comments:

I wish all my friends who read this blog a very happy St. Patrick's Day with all the luck of the Irish.

Shamrocks
St. Patrick used the three-leafed clover to illustrate the doctrine of the Trinity to his pagan audience in Ireland according to Christian legend
The Celtic people revered the shamrock as a sacred plant because it symbolized the rebirth of spring.

Leprechauns
Leprechauns were known in ancient Irish as "lobaircin," meaning "small-bodied fellow." Belief in leprechauns probably stems from Celtic belief in fairies, tiny creatures who could use their magical powers for good or evil. In Celtic folklore, the lobaircin were cranky fairies who mended the shoes of the other fairies. They were also mischievous and delighted in trickery, which they used to guard their fabled treasure.

Traditional fare of the day

Corned Beef and Cabbage
Corned beef and cabbage is the traditional meal enjoyed by many Americans on St. Patrick's Day. Cabbage served with bacon, not corned beef, is the traditional Irish fare. Corned beef was substituted for bacon by poor Irish immigrants to the Americas around the turn of the century.
Posted by Heidi at 8:47 AM 3 comments: 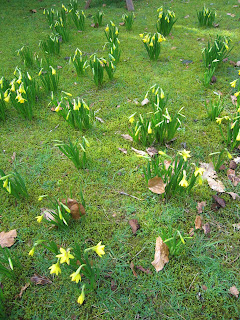 This surprise will be waiting for us next weekend on arrival. The miniature daffodils are starting to pop their heads our to greet the spring. We have three kinds of daffodils in three areas of the grass. This section should be in full bloom when we get there this coming weekend. I will, of course, take photos to share with you...

The beauty of spring color 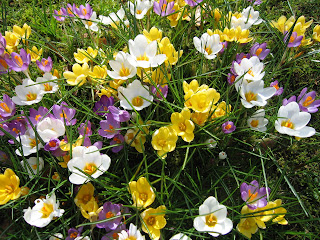 My crocus bulbs have really done me proud. I planted them in a patch of grass at our weekend cottage. They are in their full glory now. I watched the bees drinking happily from them. There were even three very active large and fuzzy bumble bees already in the garden. We also saw a bright yellow male brimstone butterfly darting about the hedges.

Our feeders are attracting not only the normal host of birds but also the Great Spotted Woodpecker, bullfinches, and for the first time we saw two long-tailed tits. Normally we have many types of tits at the feeders but never this sort although they are very common in Holland. 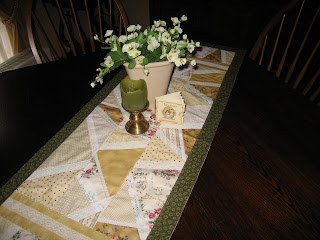 I am now decorating for spring. It is nice to change things around again in my home. I like bringing out 'new' things which I have not used for a year. It does make all things seem new again.
This tablerunner was made for a crazy quilt class I gave . It is embellished with pieces of bobbin lace. I used creams, yellows and green to give a fresh spring idea. This year, I have grouped it together with a candle, small, child's book which was a gift from a good friend and a tall vase filled with violets. It brings the light feeling outdoors now as things come into bud indoors.
Posted by Heidi at 7:25 AM 2 comments:

Getting ready for St. Patrick's Day 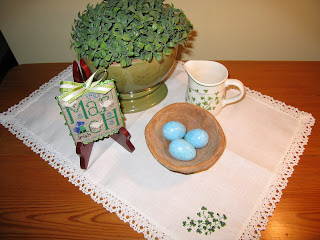 I set out a few things for St. Patrick's Day. These items are on the sideboard as you come in the front door. I just made the pinkeep. The wooden eggs and nest are something I bought over 20 years ago while the shamrock tray cloth was a gift from my mother when she visited Ireland. She bought it as it matched my shamrock dishes. You can see the little milk jug in the photo. I love this set but the factory closed down and I was never able to complete it. I do however have the bowls and sandwich plates along with a complete coffee set (coffee serving pot, sugar bowl and milk jug, coffee cups and saucers) and tea cups and saucers. It is a cheerful set to use for lunches.
Posted by Heidi at 4:24 AM 6 comments: 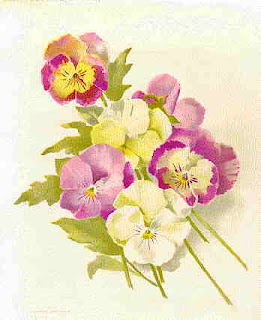 March is the month of expectation,
The things we do not know,
The Persons of Prognostication
Are coming now.
We try to sham becoming firmness,
But pompous joy
Betrays us, as his first betrothal
Betrays a boy.
~~ Emily Dickinson ~~
Today is the meteorological start of spring. In Holland, the records were once again broken with the winter season being the hottest since the start of recording weather here. Normally we average 3,3C and the temperatures averaged 6,5C making this the warmest winter. They are predicting a very warm spring now. At any rate, with our garden showing signs of wakening from a short winter sleep, we only hope there won't be a harsh period to come and damage young buds.
I have bought winter pansies and ranonkels (Persian Buttercups)to fill my flower boxes at the French doors. I feel like seeing some spring color already and winter pansies are so pretty and yet thrive in the chill that is still in the air.
Posted by Heidi at 4:35 AM 2 comments: